8 Stocks To Watch For The Week of May 21

michael kramer and the clients of mott capital own shares of Aapl, googl, and Netflix

I have been writing the past few days about the moves in semis, biotech, and the small caps, but I thought today we could focus on the large caps, because eventually for the S&P 500 to continue its rise, the large caps are going to have to get involved.

It would seem relatively easy to say that Apple has been hands down the best performer in May rising by nearly 13 percent, followed by Facebook, up half as much, increasing by about 6.5 percent. Alphabet is up about 5 percent, while Netflix and Intel are both up about 3.5 percent. 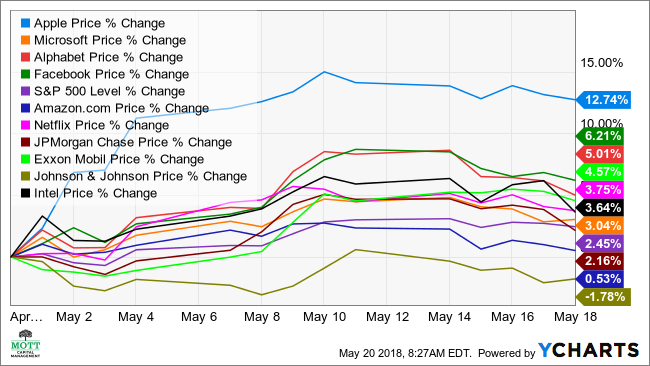 How much higher can Apple rise, hard to say based on the charts. I never like to try to predict how high a stock can rise when it has broken to new highs; it becomes a guessing game for the most part. 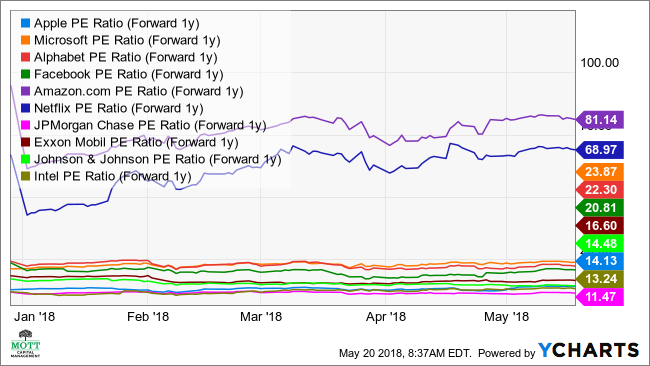 Shares are also trading at the upper end of its historical earnings multiple range, so it would suggest there is likely further room for Apple stock to rise. However, that rise may be limited from here over the next quarter until we start getting details on the upcoming iPhone launch or better visibility into next year’s estimates. 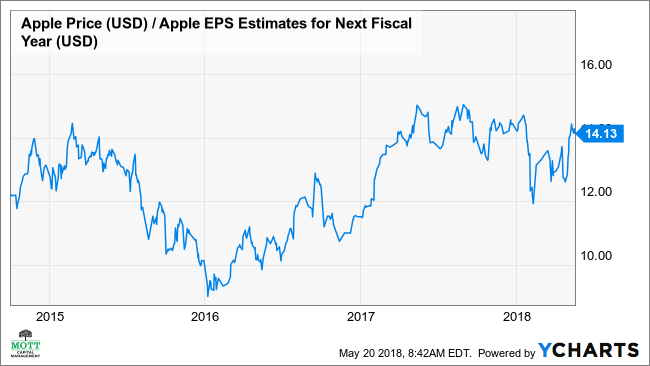 Amazon’s stock has been stuck right below its previous highs and has thus far been denied what could be a massive breakout. I thought it would have happened this past week, but the market had its thoughts on the matter. But it is quite clear that the RSI is still trending lower, and the volume has been tailing off in the recent days.  So, does the declining volume mean the sellers are waning, or the buyers? Tough to tell with no clear stock price direction in place. If the stock doesn’t break out this week, then I’m beginning to think we retrace to around pre-earning levels of $1500, and it is clear the buyers are the ones that are fading.

Analysts have gotten more bullish on Amazon as well, upping their earnings estimates for the year by a stunning 48.3 percent to $12.83 per share over the past month. But everyone knows when it comes to EPS, those numbers are BS because Amazon does what it wants when it comes to profitability. Revenue estimates have only climbed by 1.57 percent to an amazing $237.26 billion, a growth rate, of get this, 33.4 percent! That is absolutely a fantastic amount of growth given the size of the revenue base.

Alphabet has a rising RSI, and that is a positive sign momentum is still building in the stock. In fact, even Friday’s price action is a positive for the future direction. Volume has also remained relatively consistent. I still see this one rising to $1175. Plus, analysts have upped their earnings and revenue estimates for the balance of the year, by 4.5 percent and 1 percent respectively. So again, it suggests positive investor and analyst’s momentum. 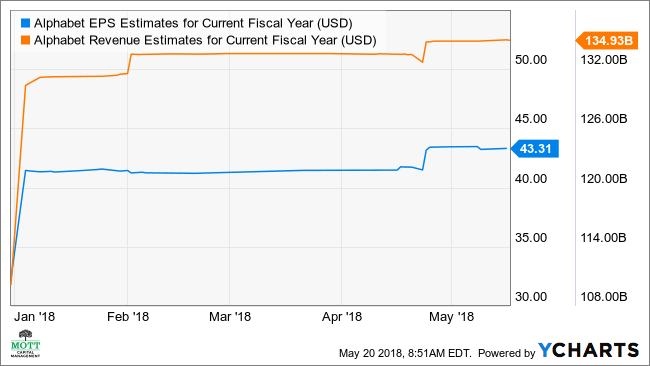 Intel continues to grind higher, and momentum appears to be higher as well.

Analysts have upped their eps estimates by about 7.6 percent to $3.85 per share while raising revenue estimates by 3.9 percent to $67.6 billion.  The setup and the momentum continue to be strong.

It had looked like JP Morgan shares broke out, and while it may merely be the way I drew out the trendline, but it appears the breakout is in jeopardy.  Volume levels have been steadily dropping, but the RSI is trending higher, and if the stock can find a bounce early in the week than perhaps momentum can continue higher.

Boeing shares appear to have broken out and can increase back to $370 could be in order.

Microsoft has broken out as well and appears headed higher.

Finally, Netflix looks like it may be getting to breakout.

The Setup In Stocks Continues To Improve

Nike’s Stock Is Poised for a Steep Pullback

Bank of America May Rise to Highest Level in 10 Years

AMD’s Stock May Rebound by 12% on Better Outlook

Citigroup’s Stock May Rebound by 10%

Micron May Break Out Leading to a 15% Rise