Michael Kramer and the clients of Mott Capital Own NFLX, AAPL

The stock market is looking to pick up where it left off last week after a strong showing following the better than expected job report and a more clear and concise FOMC Chairman Powell noted patience on raising future rates. But attention this week will turn to trade with the US and China set to kick off yet another round of negotiations.

On Monday we get ISM Non-MFG Index consensus is for 58.4

Wednesday will be the FOMC Minutes at 2:00 PM

It makes for a busy week all around, and that likely means volatility is back, and the wild stock market moves will continue. But a drop in the VIX below 20 likely sends it back to 15, and that means higher equity prices will follow. Remember volatility doesn’t just mean falling stock prices, volatility can be rapidly rising stock prices as well.

The term structure shows that volatility is likely to continue settling down in the future. 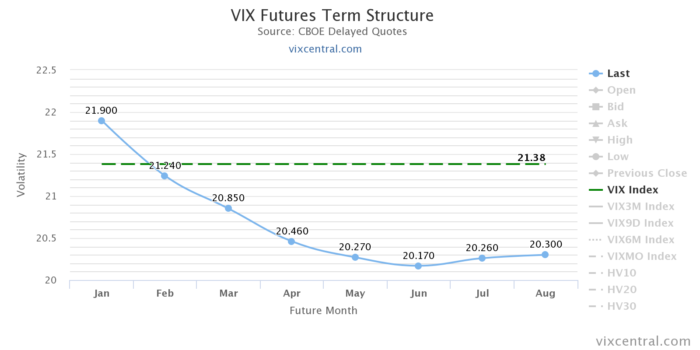 As noted yesterday should the S&P 500 rise above resistance at 2,535 likely sends the index on to around 2,630. That will be the big test, and I expect an advance above that level will be much harder than this initial leg higher we are seeing.  There is far more congestion on the chart between 2,630 and 2,800. Also, there were considerably higher amounts of volume trading in that region.

With Apple’s stock now damaged the market will need to lean more on Microsoft which is now the most valuable company. $103 has proven to be a tough level of resistance and Microsoft will need to clear that hurdle to see its stock rise further. It may not be an easy task for the stock. Should it managed to rise above $103 the next level to watch for is $110.

Amazon cleared a downtrend, which is a big positive, and the next level to watch for $1620.

If Facebook can clear $142, then it sets up a move to $148. At that point, we could say the downtrend is broken. But we have seen this story before, so any rise is suspect until proven otherwise for now.

Netflix will report result on January 17, and everyone will be focused on subscriber adds.

The technical chart also suggests a rise above $300 sends the stock back to $330.

Roku is nearing a breakout and should it rise above $34.50 the stock could move higher to $43.

I’m not familiar with Verastem, but someone asked so I looked. The chart is very impressive. The chart hit firm support around $3 and is now nearing a break out which could send it back to $5.

Blackberry is holding very critical support and if it fails here, it is on its way to $5.80.

Micron continues to look better and better and I can see it rising towards $37. Remember the outlook for the second half of 2019 is stronger than the first half, and that means the market is already starting to look forward.

Nvidia is butting up against resistance at $140 and rise above that resistance sends it to $160.

Have a great week!