Thank you for the mention MarketWatch in your article…

Who’s the next Fed boss? Brace for a ‘Trumpian surprise’

The Dow is cruising toward another weekly win, as traders seem to lap up another serving of tax-reform hope. But politics are messy, so some say don’t buy the hype. Picking a Fed boss is also tricky, but today’s call offers an idea.

The Story of The Week: GE

The story of the week, well, it just has to be General Electric ($GE). The quarterly results were terrible. Upon reading them and being in total confusion regarding the actual number versus the estimates. It was an ok; I don’t get it type of moment.  Then the realization that GE missed forecasts by nearly 41 percent set in. Analysts expected the company to report $0.49, and the company reported $0.29. With the dividend now in question, the stock opened the day down by nearly 10 percent. By the end of the day, the stock finished up.

To be honest, in my 20+ years of watching, investing, and working in the equity markets, I have never seen anything quite like this. Stocks that tank on earnings don’t come back from a 10 percent decline, and recover all their losses in one day, and then finish higher. They just don’t.  I don’t know if it was the notion that GE sees a better cash flow outlook next year or CEO John Flannery’s acceptance of the problems in his interview on CNBC. But something changed today in shares of GE, and investors decided to look to the future, and no longer saw the problems of the past.

It is tough to not be emotional when it comes to investing, it really is. But GE’s performance is an excellent reason why emotions need to stay out of investment decisions, and when you get that overwhelming feeling, just turn off the screen, and take a walk.  The easy choice was to sell; the tough decision was to say let’s see how this shakes out in a few days time.

There is just something about $23 in GE. It has held for years now. One has to think if they couldn’t crack it today, they ain’t gonna crack it.

WIth tax reform now one step closer, the banks seem as though they can be the most prominent beneficiaries of any change. Bank of America ($BAC) from a technical standpoint looks to have completely broken out and could well be back on its way to $40

Just look at the longer-term chart of Bank of America.

Why will the banks benefit?  Just look at their effective tax rates near 30 percent. 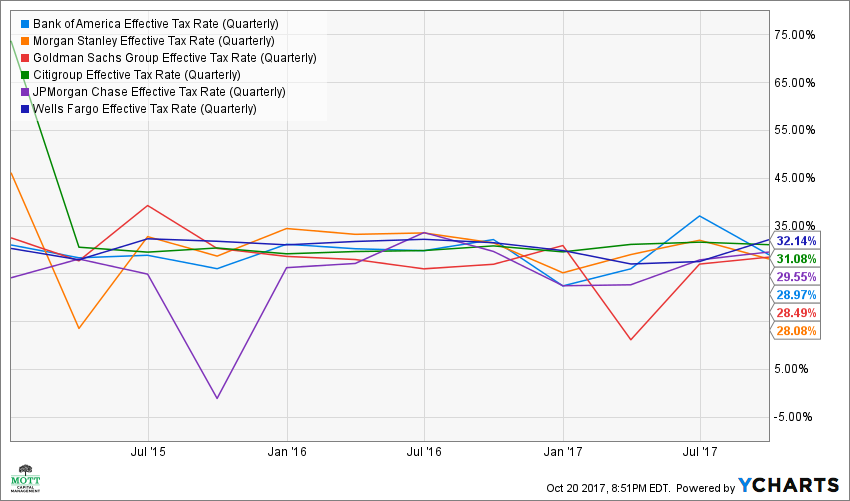 That 10 percent saving, should the rate go to 20 percent, goes straight to the bottom line.

It is unfortunate that we have to wait another two weeks or so until Apple reports because it will just mean more rumors will swirl around about how poorly the iPhone is doing or how many production delays there are. It would seem that these issues, will likely be addressed when the company reports.

It does seem odd though that Skyworks Solutions ($SWKS) moved its earnings date for the quarter, reporting after Apple. The past few quarters Skyworks has reported before. They last announced on July 20, which would have put them on target to report sometime next week. But instead, they are not reporting until November 6.

Mott Capital Management uses a long-term thematic growth approach to investing in equities. We search for investments that both reflect and help to shape…

Biotech had a lousy week, with the Nasdaq Biotech ETF falling about 1.5 percent.  Meanwhile, Celgene was the most significant drag on the ETF today, after it fell by 11.2 percent this week.  The decline in the stock seems overdone.  Nearly $12 billion was taken off Celgene’s market just on Friday alone. That is about six times the expected peaks sales of GED-0301.  Still, the significant drug in Celgene’s pipeline is Ozanimod, which came in the acquisition of Receptos. 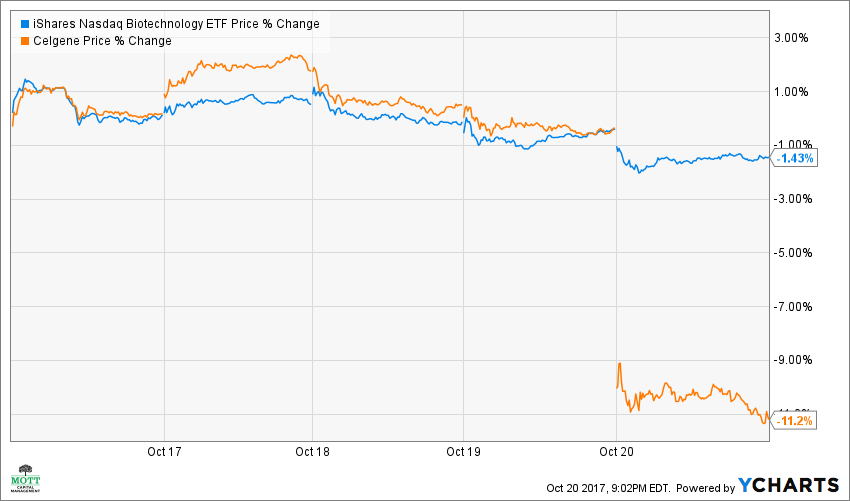 Rest up this weekend. This past week was the preview to next, which will undoubtedly be crazy.

Apple and The Chipmakers Are In For A Wild Ride

GE: Getting Excited For The Future

Allergan Shares On The Verge Of Further Breakdown

Why Apple Is Cheap Amid Richly Valued Techs

Biogen Could Rise 20% on Healthy Outlook

Why EBay’s Stock Is Overvalued After Big Gains

Why Apple Is Cheap Amid Richly Valued Techs

Netflix Has Entered Its Second Phase of Growth

Why Johnson & Johnson’s Stock Could Rise 10%

We offer a lot of great commentaries all week talking about the major an relevant market events. Be sure to subscribe to get this all and of all free commentaries sent directly to your inbox or follow us on Twitter.

Michael Kramer and the clients of Mott Capital own shares of GE, SWKS, and CELG. 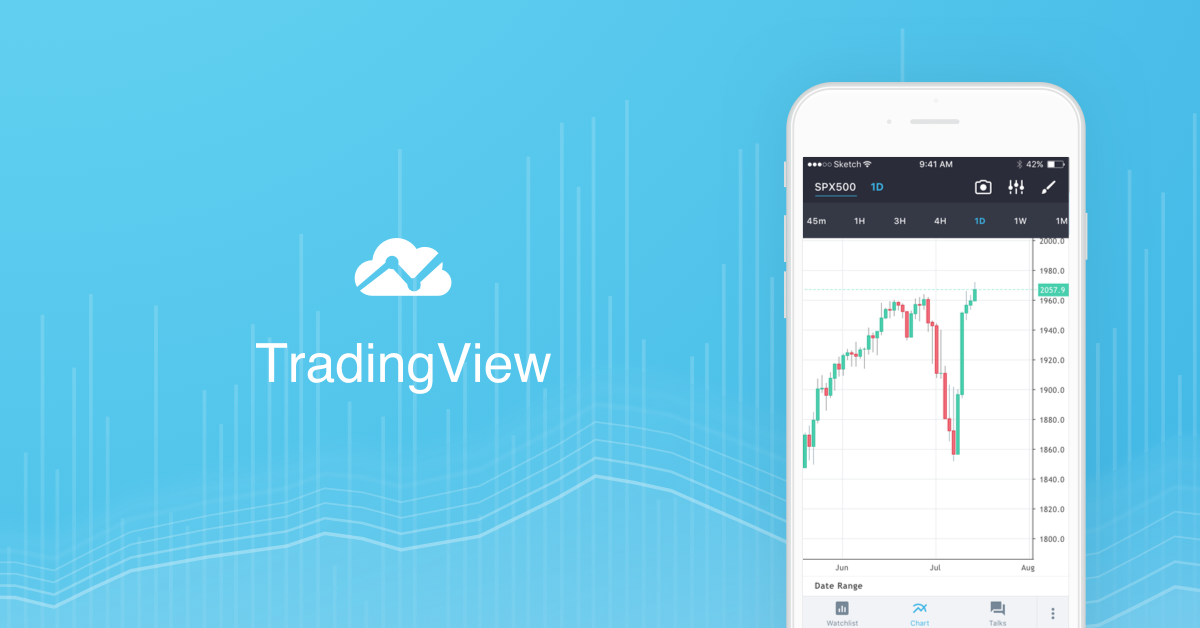