Anyone that has followed Tesla knows that when it comes to things like timelines nothing goes as first planned. Surprisingly, Tesla moved its production ramp of 5,000 Model 3’s per week out to late in the first quarter. It is surprising because I had feared it might have been far longer. The Model X ramp up seemed to be much longer and much harder than expected, while this ramp appears to be going much more smoothly. Musk later on the call said he expected to be at a few thousand model 3’s per week by the end of the year.

Tesla results came in pretty much as one should have expected. Revenues slightly better, net loss wider than expected. Capital Expenditures were $1.1 billion, while R&D expense came in $331.6 million. Cash position $3.5 billion.  End of the day Tesla is still spending a lot to ramp up production and invest in the future, while capital raise is not needed presently.

The stock traded down in the after-hours to about $305, or roughly $17.  But the stock only traded approximately 1.5 million shares after hours, while trading nearly 8.5 million shares during the day. Point being, volume wasn’t insanely high, which suggest to me at least the drop may have been slightly too much. Remember that most institutional investors do not trade in the pre and post markets. My hunch is that when trading opens, the picture may look slightly different, at least that is what my experience suggests. 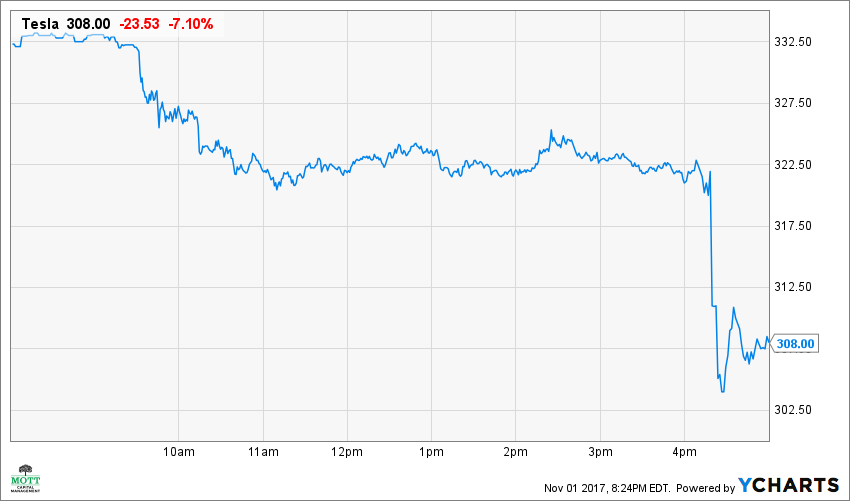 It may sound naive to some to read this but investing in Tesla isn’t about the company missing deliveries by 100 cars, or beating/ missing revenue estimates. It is about a much longer-term, bigger picture. The company continues to grow, the number of deliveries continue to rise, while demand for the cars has increased as well. Regarding valuation, the chart is all you need to look at, because in 2014 the market decided the company was worth about $35 billion and pretty much stayed there, until this past year when it jumped to roughly $50 billion. The market decided about three years ago how much Tesla was worth, like it or not. 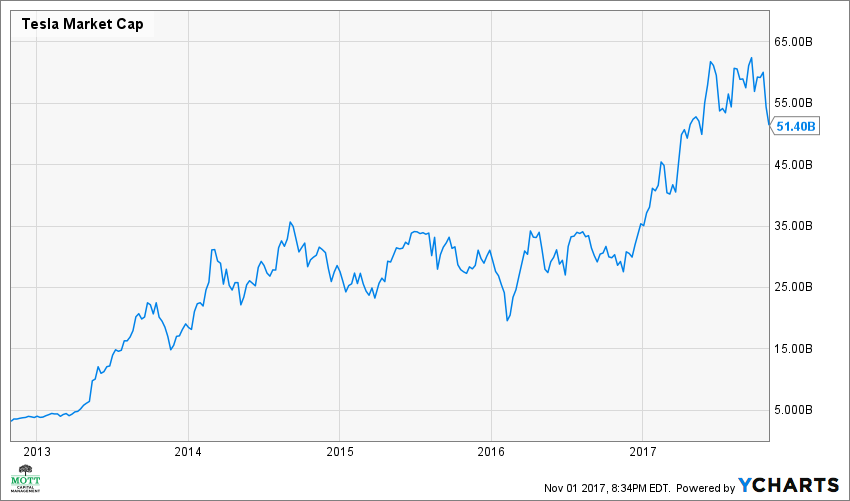 Facebook continues to crushed it, with revenue of $10.328 billion, an increase of 47 percent from 3Q’16. Wall Street was looking for $9.844 billion, according to Ycharts. The US and Canada saw a jump in revenue per user to $20.69 from $18.93, sequential; this is by far the most significant revenue area for Facebook. In total US and Canada contributed $4.912 billion of the total revenue.  The amazing thing, Facebook paid an effective tax of only 10 percent in the quarter.  Overall, it is hard to find something not to like in FB’s results.

Premium Content: Benefits include the ability to reach out to Mike with questions through a chat room, direct message, or comments.

What Good Are The Analyst Worth!

Qualcomm ($QCOM) posted results that came in higher than expected at $5.303 billion and earnings of $0.58. According to Ycharts, analysts had been looking for revenue of $5.246 and EPS of $0.81. Still, don’t be fooled by the beat, it was still a year-over-year decline. The problems at Qualcomm seems to be getting worse, not better, and picking a fight with your most significant customer in Apple, is undoubtedly not away to fix things. 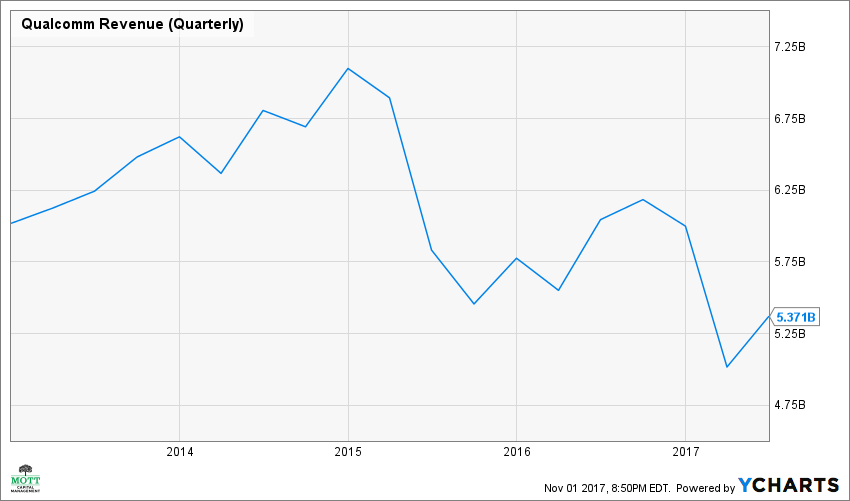 Tomorrow is the Apple show and more critical iPhone X day. There is no point to posting the expectation for Apple’s fiscal fourth quarter because no one will likely care.  I’ll just skip to the expectations for the fiscal first quarter and full-year 2018.

For the first quarter the street is looking for $3.78, and revenue of $85.34 billion, while the full-year estimates are calling for EPS of $11.16 and revenue of $266.51. Of course, commentary for the iPhone X is what matters most.

The company has a poster being presented on Friday at 1:30 on Pimavanserin in Alzheimers Disease Psychosis. The data presented should be the data investors have waited nearly 11 months to see, and in which is the foundation of their latest Phase III trial in Dementia-Related Psychosis, in which the drug got a breakthrough therapy designation from the FDA.

Apple Shares Are Set Up For Post-Earnings Fall

Apple’s Chip Suppliers Are Breaking Out

Why Mastercard’s Stock Could Rise 15%

Why Amazon’s Earnings Aren’t As Strong As They Look

Qualcomm Deal With NXP Will Eventually Get Done – M…

Celgene and Biogen May Be Signalling A Biotech Bottom

Why Tesla’s Stock Is Breaking Down

Why Is McDonald’s Valued Like a Big Tech Stock?

Why Biogen May Sink Biotech Sector As Earnings Beat

AMD Could Break Out After Results

GE: Getting Excited For The Future

Allergan Shares On The Verge Of Further Breakdown

We offer a lot of great commentaries all week talking about the major and relevant market events. Be sure to subscribe to get this all and of all free commentaries sent directly to your inbox or follow us on Twitter.