Michael Kramer and the clients of Mott Capital own NFLX, TSLA, AAPL

The Week of December 31

Believe it or not, the first week of the first week of January will be a busy one. Wednesday will give ISM and PMI reports, followed by ADP job data on Thursday, and Friday will bring us BLS Job and wage data.

There was a report in the WSJ that suggest a trade deal is in the works. Let’s not forget that Chinese New Year comes around February 5, and things typically shut down for about a week in China.  It means that 60 days or whatever it at this point isn’t really 60 days, it’s like close to 50 or 55 days.

With all the market volatility everyone has forgotten about Tesla and it’s all-important delivery numbers which will likely come on January 2 or at the latest January 3. The Bloomberg Model 3 tracker suggests the company made about 55,000 Model 3’s during the quarter. We shall find out this week.

Tesla’s stock has been a rock during all of this stock market volatility and $300 has become firm support. The stock continues to look like it is heading to new all-time highs at some point in January.

The term Netflix subscription on Google Trends continues to be hot and is approaching its highest reading for the year at 100.  I watched the newest Black Mirror Bandersnatch show this weekend. It is interactive, where you get to choose the direction of the character. It makes the show longer because if you choose the wrong path, you then have to go back to a point in the show to once again go forward. But I can see this being something Netflix does more of in the future.

I also watch Bird Box over the weekend, and it was an awesome movie. The plot was strange, but the action was outstanding. The company said that 45 million accounts watched the film in its first week.

If Netflix keeps putting shows and movies out like these two, they could raise the price to $25 a month, and it would still be a bargain. Consider that it costs $32 for two people to go to the movies to see Aquaman.

The stock looks like it may have now successfully refilled the gap, and a rise above $260 likely starts to push this stock higher again. Hopefully, it can now increase in a steady and linear rate, instead of that big blow up last year.

The dollar index looks like it is on the verge of a fairly steep decline and that could be a big positive for commodity prices and oil. I could see the dollar index falling to roughly 94 from its current 96.50 on its first move lower.

Oil could be a beneficiary of a weaker dollar, and its price could rise to around $49, in its first leg higher.

It could help Exxon bounce to around $72.

Chevron could also use a bounce, and $112 appears to be the first likely stop.

Copper would benefit too, and it could rise back to around $2.90.

Freeport McMoran would benefit from stronger copper prices and could rise back to around $11.85.

Apple continues to be a linchpin for the stock market and with the quarter ending and the company likely to report results in a month, I’m still wondering why analysts aren’t cutting their revenue estimates for the company? Something seems off doesn’t it? 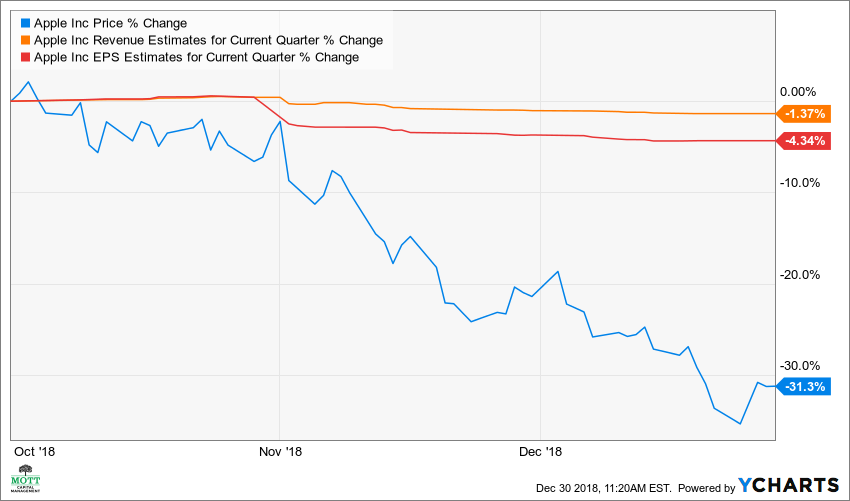 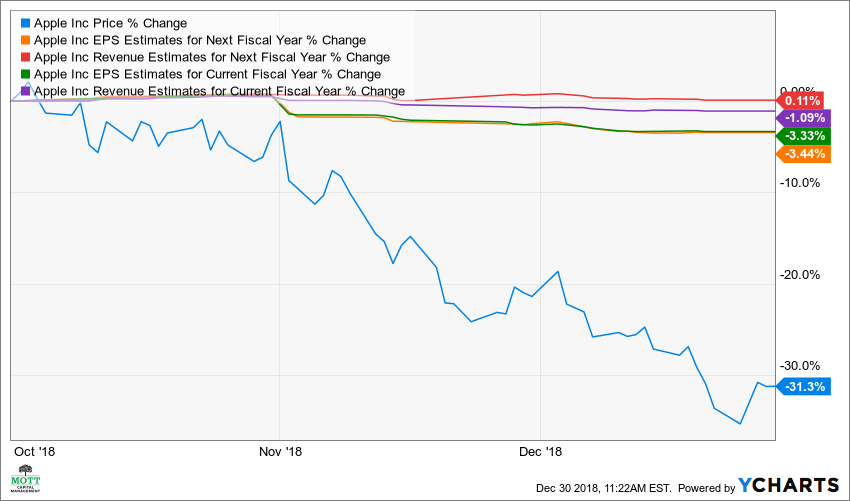 Have a great week and have a happy New Year!