The Reflation Trade Is Dead, Plus Micron, Roku, Netflix, and Biotech’s

The Reflation Trade is Dead

If you haven’t seen this chart before, then take a close look at it. It is a comparison between the Nasdaq and Dow Jones Industrial since November 8, 2016. Of course, that was the day of the US election, and when President Trump was elected. It unleashed a wave of optimism that his pro-growth economic policies would stoke growth in the US economy, causing a spark for inflation, interest rates on bonds to rise, while significant tax reform would boost corporate earnings. It was nicknamed the “reflation trade,” centered around the bank, material, and industrial stocks

The chart below shows just how tight the correlation between the NASDAQ and the Dow were for almost two years, until, May, then something changed. 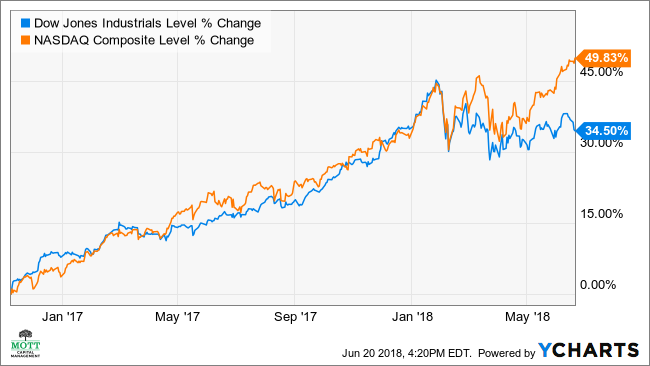 The next chart shows the reflation trade is dead and is rotating into the risk-on, growth parts of the stock market, namely technology, biotech, and consumers.

I talk about this in my member video today, and went through why I believe this is happening, and what it means for these groups in the coming months.

I think overall, quickly, the divergence is only going to widen throughout the balance of the year.  You can watch the whole thing here, and you can get the first two-week’s free, so if you don’t like the service, cancel it. I won’t be insulted if you think it sucks! 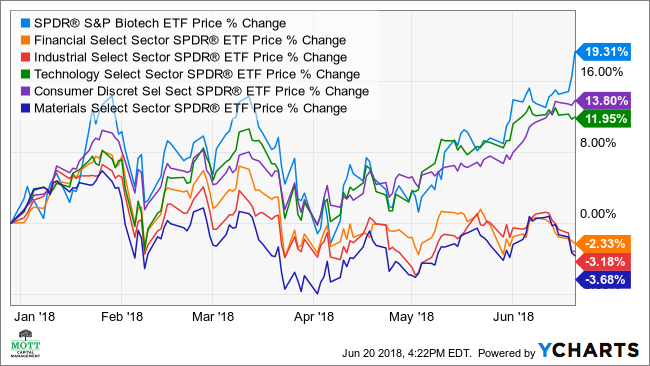 Microns results looked good all-around from my point of view. Shares were trading up some after hours to $60.50. I know I said I thought shares might go lower after results, and to this point, I’m wrong, yes. But let’s see how it trades tomorrow before we get too excited.

Remember after-hours trading is always tricky, and the stock traded about 10 million shares tonight. I know 10 million seems like an awful lot, but it is only 1/5 of today’s total volume of 56 million, and its 50-day average volume of 49 million.

An increase above $64 is a huge deal, and likely sends the stock back into the low 70’s. But tomorrow’s trading will be critical.

The S&P 500 was up about 20 bps, but again clear divergence amongst sectors, with Financials and Materials down, and Industrials flat. Meanwhile, Biotech continues to soar, up over 2.3 percent, after a robust technical breakout, yesterday. Technology and Consumer were also better on the day.

There is no surprise I’m sure if  I tell you that Netflix, Amazon, and Facebook all hit new highs today.

Roku shares got right up to resistance today and backed off. A rise above $48.20 probably sends towards $52.

So like if Netflix hits $425 tomorrow, what happens next? I mean really? I have no clue.  But if the last breakout resulted in a $133 point gain, like the previous, then this one takes it $466. We’ll see.

It would seem to me the dollar broke out. Keep an eye on oil.

You better watch those banks tomorrow, big stress test results. Is anyone really expecting some of the banks not to pass the stress test?

The falling triangle is just getting smaller and smaller. You know my thoughts.

That is it, folks! Night