Semiconductor stocks were the weakest group today, with the SOXX ETF dropping by roughly 1.5 percent. The big loser in the group was Applied Materials (AMAT), dropping by about 7 percent. The company reported slightly lower than expected revenue guidance for next quarter. But let’s face it does it come as a surprise? It shouldn’t at this point. Many of the biggest chipmakers have disappointed, going all the way to the first significant report out of Taiwan Semi back in the middle of April. AMAT noted smartphone sales have been weak, and below expectations. Well, there is a shocker! Haven’t we heard that one before?

Despite the pullback, the group is on fire in the month, rising by nearly 7 percent even after today. So, you can’t complain too much, and the outlook for the group still looks solid on many fronts.

Can you believe AMD shares are up nearly 40 percent just since the start of April? Wow. That relative strength index is well into overbought levels, with a reading of around 73. But this one could be overdue for a modest pullback back to $12.50ish.

Despite the S&P 500 stalling out, the Russell 2000 continues to reach new record highs, and the breakout continues.

With stocks like GrubHub in the index, it would seem there are more gains likely to be had. The chart on GrubHub looks powerful and ready to breakout.

Proofpoint is another example:

Well, Biotech stocks as measured by the XBI, are up over 5 percent just since May 10, maybe it has something to do with the speech last week on drug prices? I’m not sure about that; I’m looking through some of the big movers, like Loxo Oncology, popping over 30 percent after positive phase 1 data presentation at ASCO. 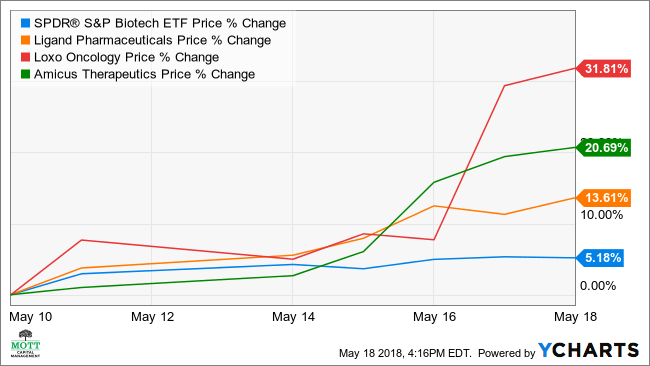 We will see what the next week or so brings, and which stocks continue to perform the best in the group. The leadership in that sector is still not coming for the most part from the big players.

Overall it was a solid week in which to build for the broader market, and I will discuss more in further detail over the weekend