Stocks Finally Break Out, Along With Biotech, Amazon, and Alphabet – The Daily Rundown

MICHAEL KRAMER AND THE CLIENTS OF MOTT CAPITAL OWN GOOGL

The S&P 500 posted another strong day rising by about 90 bps, and what is most important is that market snapped right back after yesterday sell-off and climbed over technical resistance at 2794, managing to finish the day at 2798.  The chart also shows us the index was able to hold and test the breakout.

So I’m hoping this sets up a run to about 2,900 in the coming weeks. But I will not be completely satisfied until the index can rise above 2,810.

Another group that broke-out in a big way is the large-cap biotech’s the IBB ETF, the XBI had broken out a while back. But with the IBB now breaking out, the next big test will come at $121.

Amgen is also looking pretty strong here, and a move to about $205 could be in the works.

Regeneron still has some room until about $395.

One must remember that some of these stocks are trading at very cheap multiples, and for some them like Gilead’s and Amgen, there could be some meaningful multiple expansion.

I still don’t like Gilead, but that doesn’t mean I can’t recognize when it is going to rise. 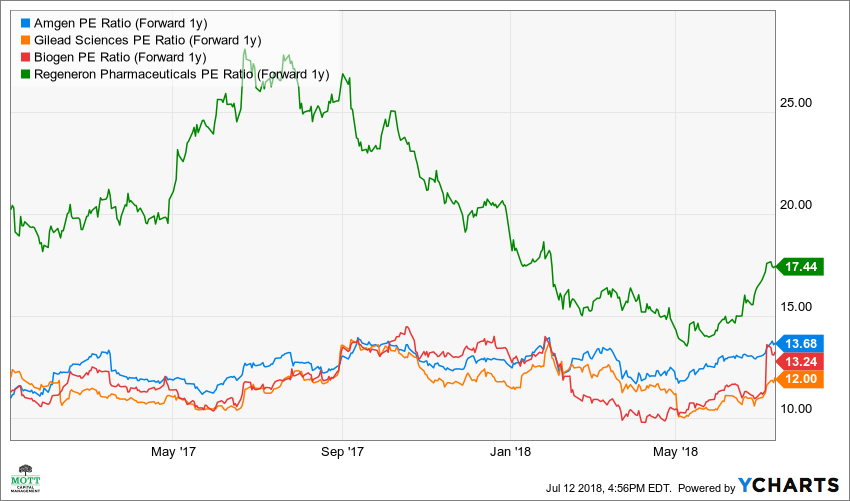 Who was the jerk that said Amazon was going to go down 15 percent, that’s what I want to know? Oh wait, that was me. Yeah,  this was one the more prominent calls that I messed up, and lucky for me it doesn’t happen too often that I get on this wrong. But it does happen.

Last night, when I saw Broadcom was buying CA, I thought I must be foolish not to understand why Broadcom would buy CA. It was pretty clear to me I was just in over my head. Well, it turns out I wasn’t the only one,  and Broadcom was punished falling over 14 percent. I had been a big fan of Broadcom before this,  and like that, I’m not anymore. I still can’t figure out why they did this.

Alphabet shares closed over technical resistance at 1,198,  and that is a big positive as well.

Tomorrow will be a big day for the banks, and here is my final thought regarding the banks going into tomorrow’s report. The banks have performed horribly this year, despite what has widely been expected to be a monster year for earnings, and still, they have struggled. Everyone had hoped the big buyback would turn the banks around, and yet they still struggle. Now earnings are upon them once again, and you have to ask yourself this, are the banks acting like a group that everyone expects to have a monster quarter? No.

Look at the performance of Amazon, Netflix, Alphabet, Facebook, Apple, Microsoft, et al., are they rising just because or they are climbing into earnings because everyone is not only expecting them to post significant results, but to beat those expectations.  Can you say the same for the banks? Surely not. The market sends very loud and clear messages sometimes, and sometimes it best to listen.

Maybe, in this case, the interpreter, me, is misunderstanding the message and the banks will rally big time tomorrow and will they embarrass me like Amazon.

We find out tomorrow.