Michael Kramer and the clients of Mott Capital own Netflix, Amazon

The stock market rebounded some on May 14 rising by about 0.8% on the S&P 500. It had been up by over 1% throughout most the day but gave back some by days end. The catalyst centered around President Trump dangling some optimism around the trade war. In my opinion the less focus there is on the topic the better, out of sight out of mind. It has been my experience in the past the market has a very short-term memory on events, and the sooner it can be distracted by other topics, the better off we are.

I continue to believe there will be a small impact on the US economy and the global economy due to these tariffs or a potential trade war. Frankly, the US doesn’t export much to China. As for the poor consumer in the US that everyone thinks will foot the bill, don’t worry China is already taking care of that part.

One needs to look no further than the rapid devaluation of the Chinese yuan to the US dollar.  From May 3 to May 14 the yuan has dropped by over 2% against the dollar. It is almost as if China knew this was coming because the yuan started to devalue in the middle of April. Since the middle of April, the yuan has fallen by around 3%. If you don’t think they are playing games with the currency, I think you may be mistaken.  Notice how the yuan started to devalue in April of 2018, right around the same time the tariffs began to go into effect. It continued to depreciate right through December 3, which was around the time of the G20 summit, to the tune of 11%.  That was when it began to strengthen again, well until just the last few days and weeks.

Please remember that China does not have a free-floating currency. They set a mid-point price every day, and that mid-point has a 2% band for the currency to trade up or down. This is not the Euro, GBP, or the Dollar.  (Premium Content: How China May Battle The Tariffs)

Cheaper currency, cheap goods, nothing to worry about.  Of course, there is some sarcasm there.

I thought I should note that the Euro has also declined by about 10% since April 2018. However, you can see it has happened in a far more orderly manner, which has the marks of a market. It isn’t as if it has suddenly started to weaken.  Anyway, that is my point of view, agree or disagree.

The S&P 500 had some mild success today rising above resistance at 2,836 and managed to close right on that level. Not the best of signs, preferably I would have liked to see the S&P 500 close at the highs of the day, doesn’t give me a great feeling about tomorrow.

Netflix didn’t have the best of days, nor did Facebook or Alphabet, despite the strong market showing. However Amazon rose by about 1% on the day, but looks can be deceiving because it too failed to rally past a resistance level at $1,850. Which is concerning, because this group was so weak today.

Netflix is clinging for life at $342, and this level needs to hold for the stock. For now, it looks like $405 is off the table. I got this one wrong.

Boeing continues to look horrible, and I don’t think the outlook is improving. A downtrend has formed in the stock, and the long-term chart shows how the uptrend is in danger of being broken, and I’m not sure what happens next? $325, $297? Maybe more.

Here is one more chart to look at and right or wrong; one might say that Boeing is still kind of expensive when compared to itself historically.  Where Boeing belongs in this chart as of right now, I’m not sure. You can decide. 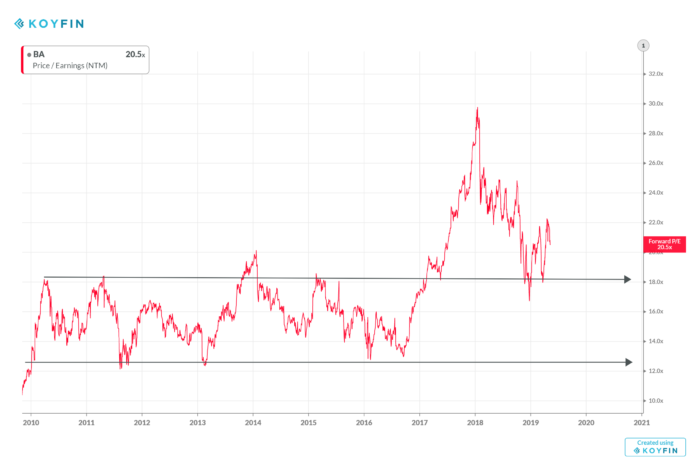 I don’t know what to say about Tesla anymore. Maybe I have become blinded my hopes for the stock to rise.  It just can’t get out of its own way. It is in a spot where it needs to find a bounce or risk falling to $190.

Square fell below support yesterday at $65.50 and tested support at $62. I do not like the way this looks one bit. I worry it falls back to $56.  (Premium content: Square Is Now Breaking Down)

Just think we get to do this all over again tomorrow.  Night!

Mott Capital Management, LLC is a registered investment adviser. Information presented is for educational purposes only and does not intend to make an offer or solicitation for the sale or purchase of any specific securities, investments, or investment strategies. Investments involve risk and unless otherwise stated, are not guaranteed. Be sure to first consult with a qualified financial adviser and/or tax professional before implementing any strategy discussed herein. Upon request, the advisor will provide a list of all recommendations made during the past twelve months. Past performance is not indicative of future results. may 14  Amazon