Michael Kramer and the clients of Mott Capital own Netflix

Stocks surged to a new closing record high on April 23, with the S&P 500 blowing right past resistance at 2,915 and moving quickly over 2,933. Man, have we come a long way. It was almost four months ago to the day that S&P 500 closed at 2,351.10, and it felt like the world was caving in. But we remained positive, climbed the wall of worry, and proved everyone wrong on the way higher.

I could go on and start pointing out all the stories I wrote about why the economy wasn’t going into recession and why the S&P 500 would rally and move higher, but I won’t. Looking forward I still think the S&P 500 has further to climb, and 3,200 isn’t out of reach. 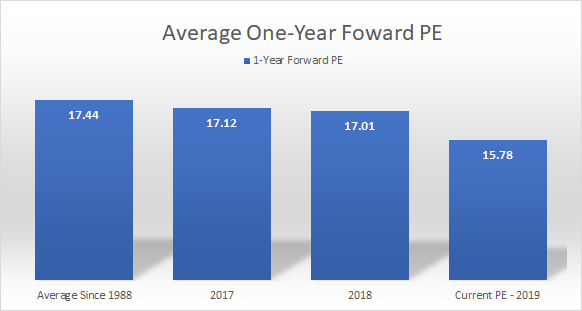 But here is the thing, what if earnings estimates dropped too far, and they start to rise? After all, most investors thought the world was going into recession, which is why stocks fell so much in December. That outcome doesn’t seem to be in the cards in 2019.  If earnings estimates for 2020 rise by just 3%, the S&P 500 could increase to 3156 and would still be trading at only 16.5 times estimates.

One should be aware that the market can continue to rise, and depending on the pace that estimates earnings increase, the market could get cheaper!

The Russell had a good day too, but clearly, it is being held back by resistance around 1,590. It needs to clear this region. I think it will also, I sure hope so for the sake of my IWM calls.

Anyway, I revised my Amazon forecast after seeing some bullish activity today in the options. I’m not going to get into here; I talked about more in the subscriber area. The stock also broke out rising above $1,900; it puts $2,025 in to play for earnings. It doesn’t mean my fears about the quarter are gone, but I’m going to fight what the market thinks. I’m just glad I don’t own this one.

Facebook continues to look very strong, and $186 is coming very quickly, and $195 may be next.

Netflix did break out today, and I’m using $388 as resistance because there seems to be a trend line, but I think the next level is $405. I guess all the Disney streaming and slowing subscriber growths fears are fading? Guess so.

Roku had a big day, and I’m about to throw in the towel here and admit defeat. Should the stock rise above $64, we can call it a breakout. So much for $52. Oh well.

Intel looks like it getting ready for its next leg higher, which could send the stock towards $64.

JD hasn’t broken out, but it looks like it is getting closer.