As I look all over the internet trying to find the clues about the primary driver behind the equity market sell-off, or better yet when it will stop. I came across all sorts of crazy indicators that speak to the signs and foresaw this steep sell-off coming. While it isn’t clear that anybody has an answer to when it will end, some even see prices falling sharply lower. Many of the bears that have called for the markets doom for the past few years are pounding their chest claiming victory.  The one thing that does seem clear to me is that market is likely oversold, at least by the metrics I use that seem reasonable.

I looked at that market sell-off from another standpoint, using the 200-day moving and created a ratio by dividing the level of the S&P 500 by the 200-day moving average. The current ratio of 0.87 would suggest that the S&P 500 is trading 13% below its 200 day-moving-average. That is its lowest level since October 2011, when it reached 0.879.  Remember it was in 2011 that saw the Greek Debt crisis come to the forefront, as well as S&P downgrading its rating on US debt.

There have only been a handful of periods that saw that ratio fall to even further levels: the 2008 financial crisis, the period after the Dotcom bubble in 2000 through 2002, and in 1974 when Nixon resigned. Anyway, you can see it on the chart. 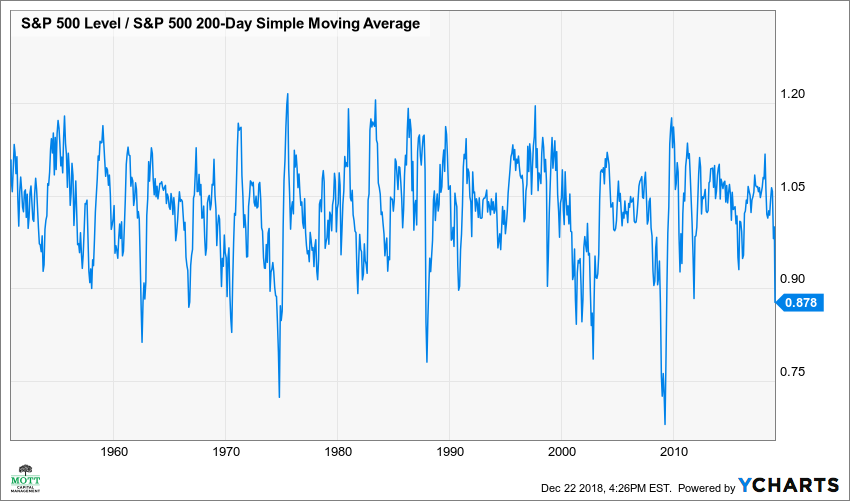 When we look at the S&P 500 in a different light using the relative strength index – a technical indicator, one can see the RSI has fallen to its current level two earlier times since 2010. The first was in August 2011 and the second was in August 2015. In both case a year later the S&P 500 was higher.

The index is also trending below its lower Bollinger band – which is a measure of two standard deviations from the 20-day moving average.  It too may suggest that the index at this point is oversold.

Is the stock market likely oversold? Yes, it does seem  likely that is the case. But does it mean it won’t go lower? Well, as you can see from the metrics above it possible it can. Although in most of those cases there was some serve geopolitical or macro events occurring.

I guess it depends on what you consider too be a high stake geopolitical events and do not.  Perhaps to some, that may be the case at the moment.

Then There was Nike

Then there is new from Nike, which reported earnings results last week. It sure doesn’t sound like Nike sees many issues in China. From their conference call:

Then they had this to say about the current trade conflict:

While there has been uncertainty of late regarding U.S., China relations, we have not seen any impact on our business. NIKE continues to win with the consumer in China. For over three decades, NIKE has been a brand of China, for China. We’ve connected deeply with the consumer here through our key city focus on Shanghai and Beijing.

There was this commentary from FedEx earlier this week, which admittedly isn’t great, but it certainly doesn’t make think the world is grinding to a halt and going into decline.

In the U.S., growth remains solid, driven by robust consumer spending in favorable conditions in the industrial sector. Internationally, economic strength seen earlier this year has given way to a slowdown. The peak for global economic growth now appears to be behind us.

Again, I don’t think this should be a surprise, is it?

None of this easy to figure out, but we will continue to try.