MICHAEL KRAMER AND THE CLIENTS OF MOTT CAPITAL OWN AAPL, TSLA, MSFT

This will be one of the busiest weeks of the year, with an FOMC meeting and many mega-cap companies’ earnings. It could be one of those weeks that extends the recent rally or reverses the move higher over the past month.

Stocks did a lot of nothing last week, just a whole lot of up and down movement, with the index finishing flat. To this point, the level around 4,185 is providing plenty of resistance, and the weak close on Friday is suggestive of lower prices. A failure to quickly take out Friday’s highs on Monday likely leads to a reversal in the market, with 4,185 serving as a short-term top. The region around 4,125 should offer plenty of support. So a break of support at 4,125 is likely to indicate further losses, with a quick drop and gap-fill to 4,020. (Paid RTM Premium Content – The Week Ahead – Reversion To The Mean) 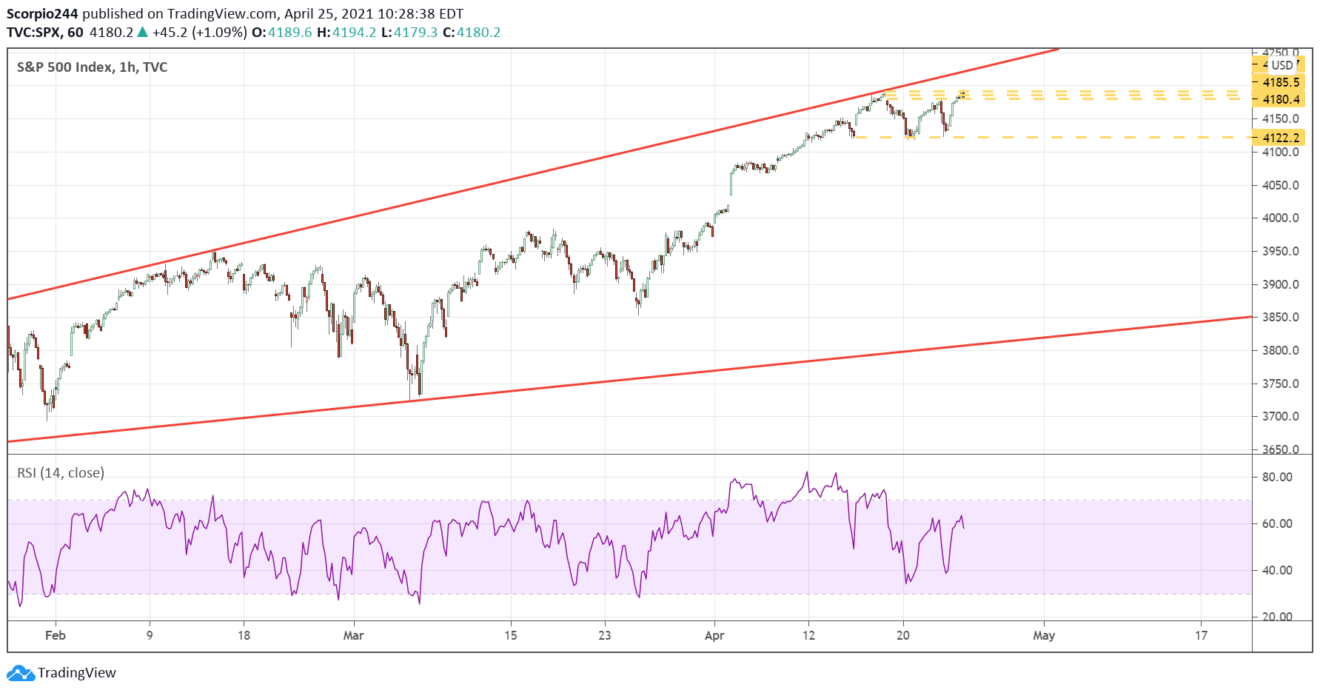 The NASDAQ Composite was able to make it back to 14,062 and failed on Friday. It successfully closed the gap created last Monday morning, but was unable to push above it. This, of course, was also a level of resistance from Mid-February. We can see a clear downtrend in the NASDAQ Composite, and now that the gaps at 4,162 are all closed up, we should resume the trend lower. 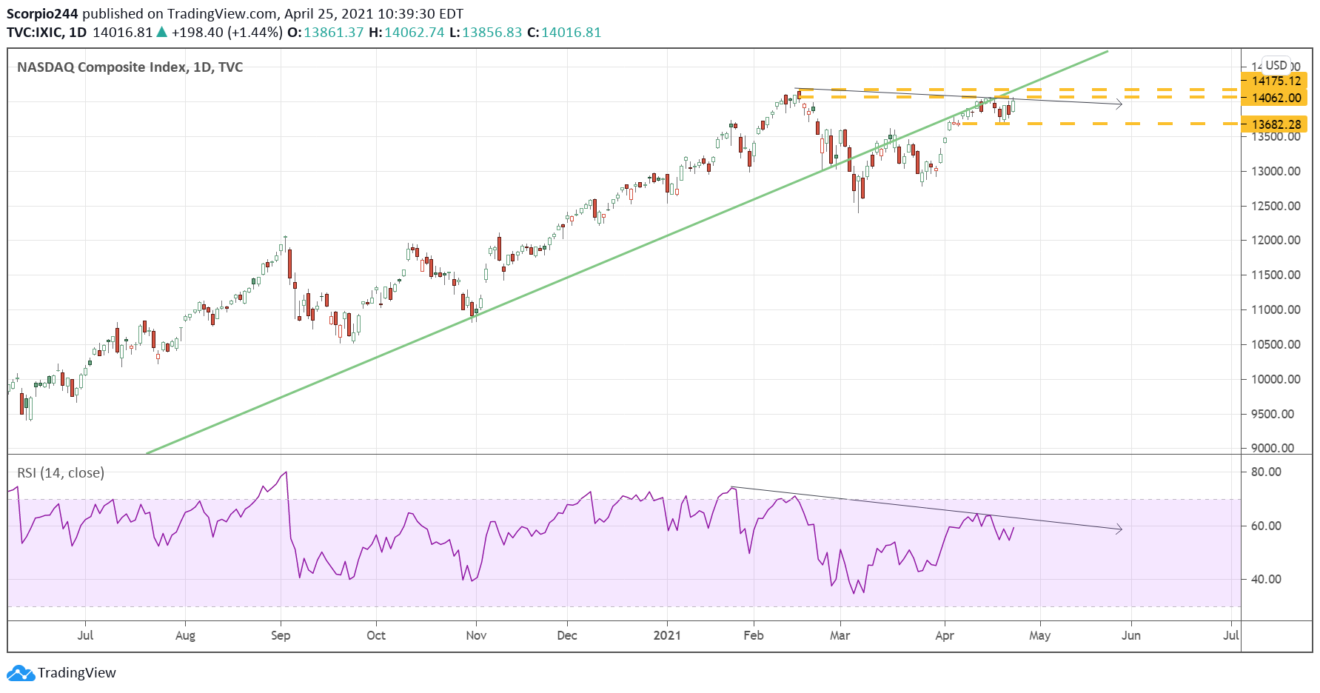 There is another bear flag forming in Bitcoin, which means this period of consolidation is likely to end with another sharp drop. The next support level is likely to be someone between 42,000 and 43,000. 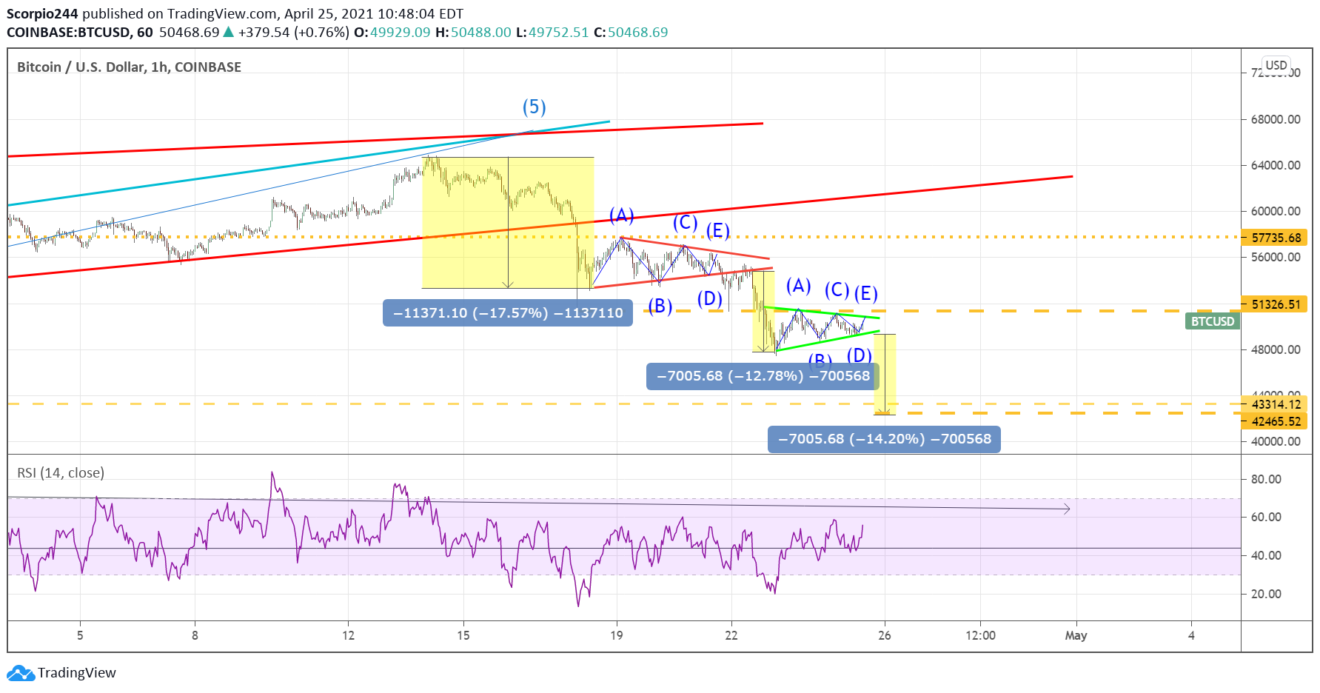 Tesla will report results on Monday, and it is hard to deny though the stock has been trending lower, and there is either a symmetrical triangle or a bear flag that has formed in the chart, and both indicate that lower prices are to follow. It is possible that the stock first rises to around $800. But once it breaks $700, it is likely the start of a rather steep and prolonged drop. ((PREMIUM MEMBERSHIP CONTENT –  Tesla Earnings Preview- Need To Know Guide ) (This has been changed because I had originally put some commentary that suggested bitcoin unrealized would go to other income, this was not right, because bitcoin is not considered a security. ) 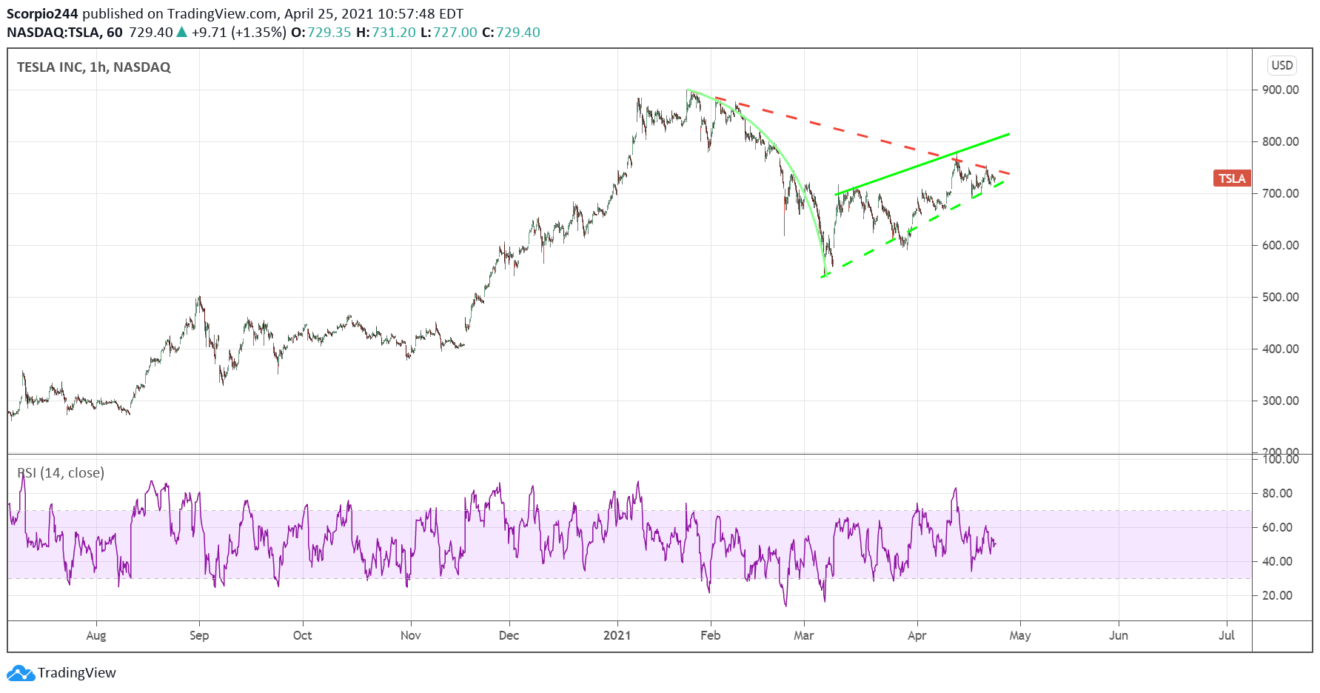 Amazon has a bull flag that has formed, and that suggests the stock rises. However, I think it goes up ahead of results to around 3,48,5, completing a 5 wave cycle. After results, I could see the stock retracing some of those gains and moving lower towards 3,200. 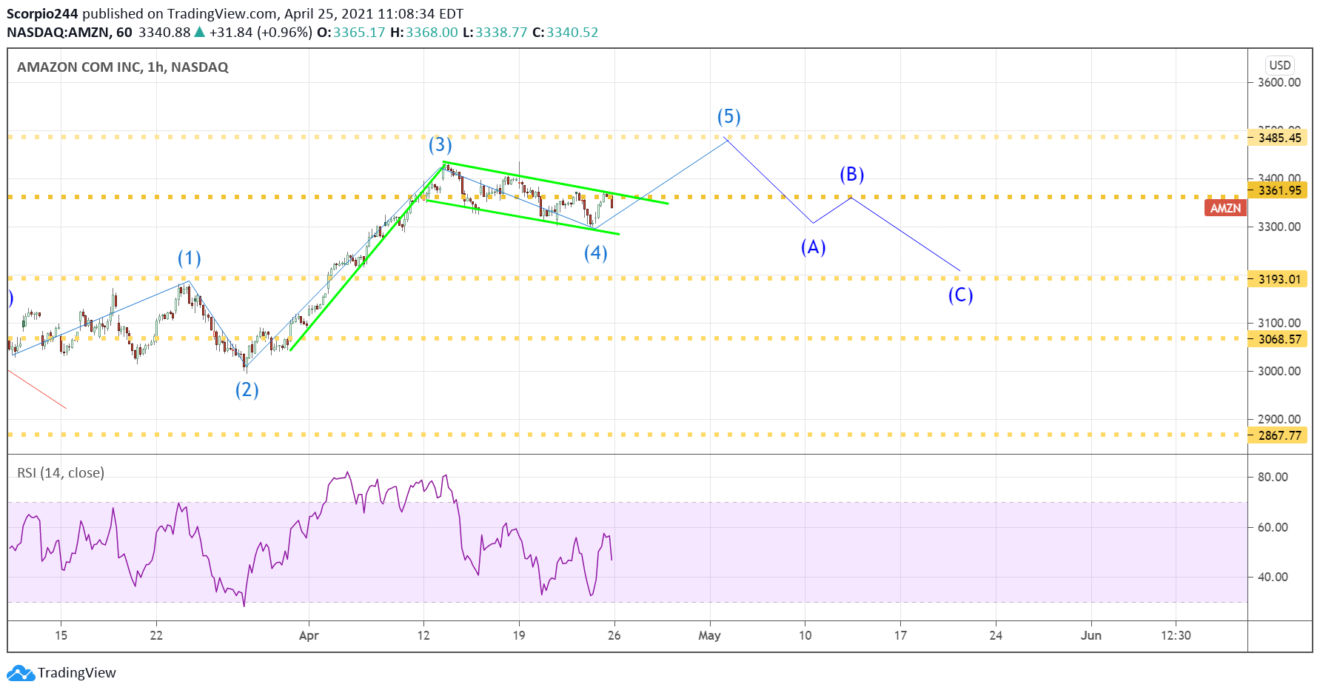 Like Amazon, I would not be surprised to see Apple run up to around $138 ahead of earnings and then give back, especially if the company doesn’t give guidance. A drop back to $127 in the days following results seems likely. (Should be free to read- What If Apple Sinks Following Results?) 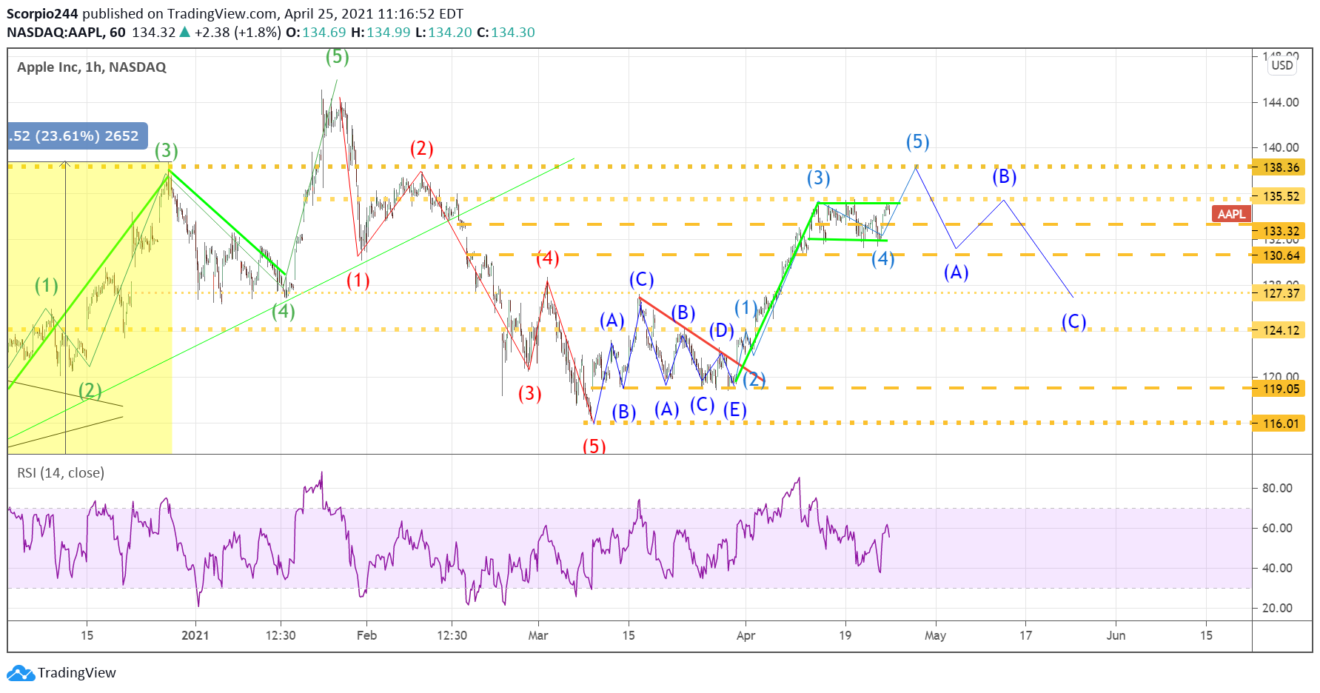 Microsoft has been moving up and still looks strong. I happen to think Microsoft can continue to rise, with a push coming towards $280. (Should be free- Microsoft’s Stock May Rally Further Following Its Quarterly Results) 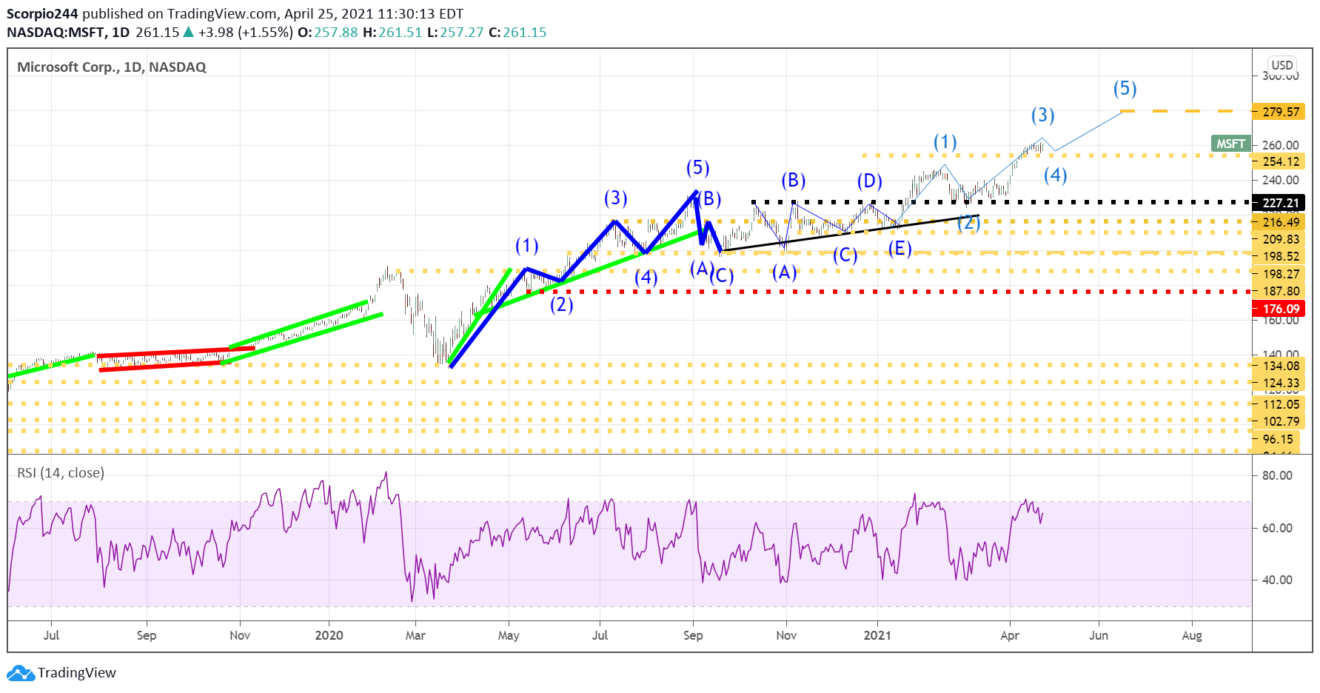 AMD will report this week too, and as we learned last week, quarter, rising costs and weak pricing power led to no margin expansion. If that happens again this quarter, then the stock will likely fill gaps down to $62 and perhaps as low as $58. There is a bear flag present in the chart as well. 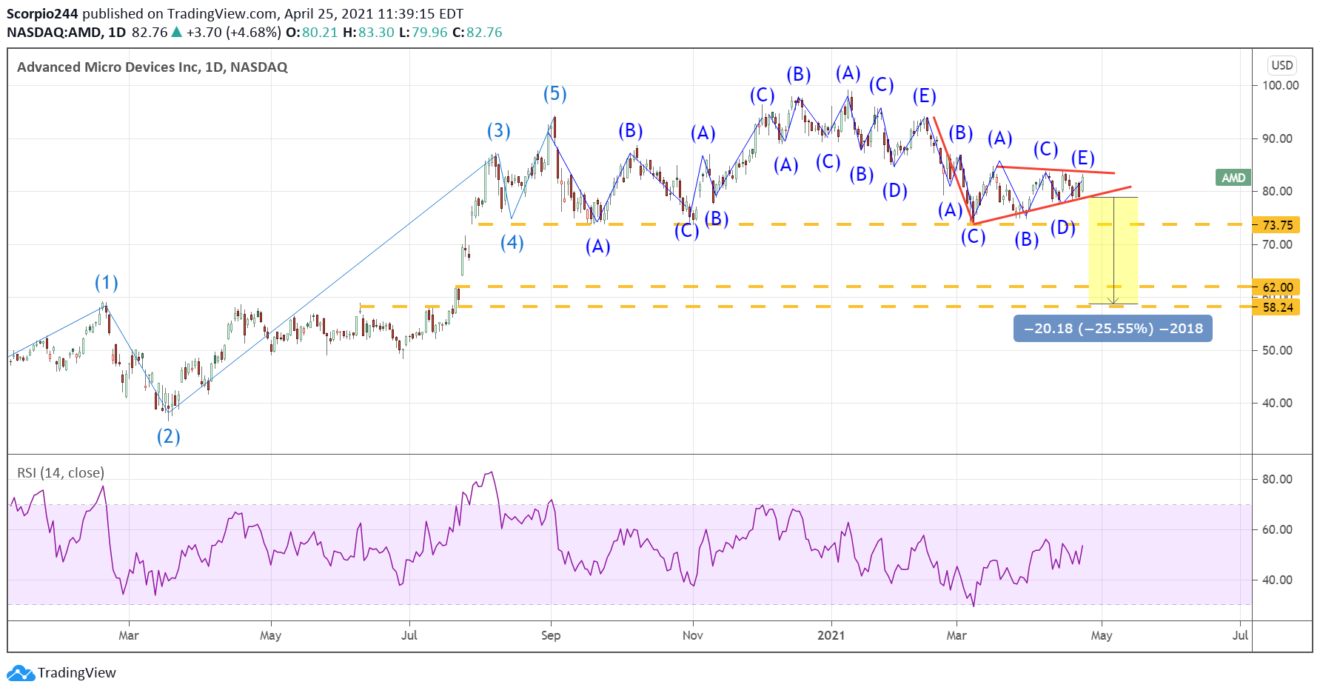