Utilities were the best performing sector during the past week with the $XLU rising by 1.72 percent, while the broader S&P 500 fell by 1.25 percent. Semiconductor $SOXX performed a bit better, dropping only 63 bps, while discretionary stocks $XLY declined by about 1 percent. 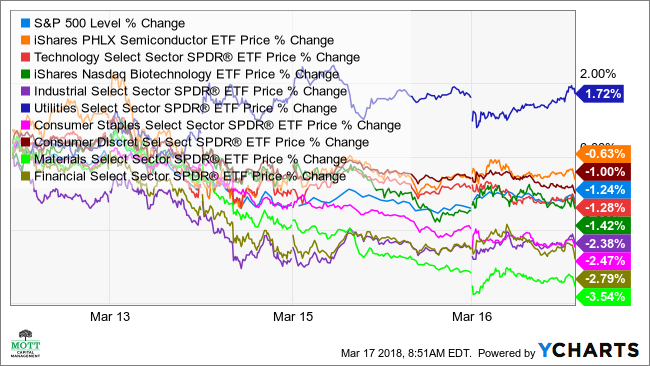 Below is the list of the most significant winners and losers from the week S&P 500, I pulled the data directly from Ycharts. 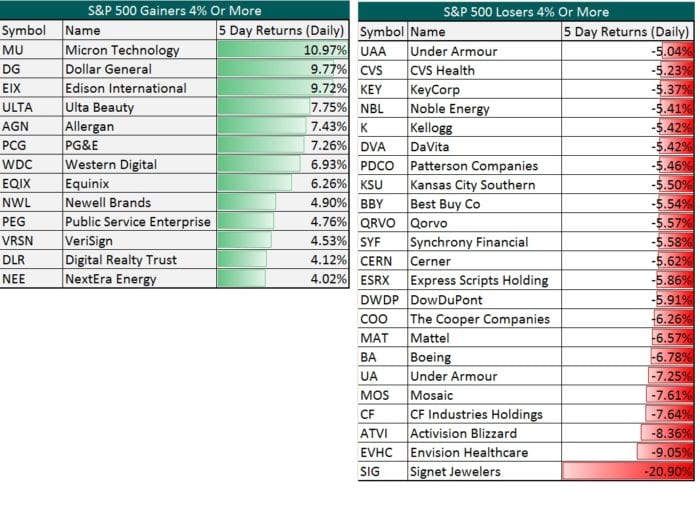 To no surprise, Micron was the best performing stock in the S&P 500 up by nearly 11 percent. As we have mentioned a few times during the week, the stock received many huge upgrades. Baird upgraded the stock and put a $100 price target up from $60, while Evercore increased its price t $80 from $60. Nomura also raised its target to $100 from $60 as well.

The stock has been running into earnings, and it seems like a somewhat familiar pattern this year. Amazon, Netflix, and Adobe are a couple of names that come to mind. I would not be surprised if it continues to run into those result. Micron already pre-released results on February 5 and the pre-release was above the previous guidance. The critical piece will be guidance for revenue and margins going forward.

Amazon just continues to rise along its previous trend line, and for now, is showing no signs of slowing down. I still have concerns about Amazon’s shares going forward, as valuations continue to increase. But to this point, my viewpoint has been wrong.

Facebook is going nowhere this year, and the chart seems relatively directionless, and that is a problem for me. The trend is just barely moving higher, and one could argue the trend is shifting to a move lower. The RSI has been trending lower since the start of 2018, and volume has been just around the average. I’d be watching for a rise above $189 before I’d get too bullish on it.

I think Netflix shares are likely done seeing a much more significant move higher at least we until we get closer to earnings. The RSI is trending lower, and volume has been falling as well. I think the exuberance is waning for now. Again, I own Netflix, and I am more than happy to see it continue to rise, but a breather is needed for a further move higher over the longer-term. I still think risk is to the downside around $295 over the next few weeks.

Tesla shares have been a mystery this year and have become nothing but a haven for the day and swing traders. The stock for the most part is slowly continue to trend higher.

For now, $340 to $360 seems to be the area where the stock continues to run into trouble. According to this Bloomberg Model 3 tracker, production rates are beginning to rise again but is still only around 725 per week, well below the target of 2,500 per week the company is targeting for the end of March. There are just a couple weeks left in the quarter, so I don’t know how the company is going to spin whether they hit or missed the mark at the end of March. My guess, they will say something like going into the final few days of the month we were producing Model 3’s at a rate of 2,500 per week. I have owned this stock for too long, and have heard the stories before, I wouldn’t be surprised. We will find out soon.

That it is going to be it today. More tomorrow.

More Upgrades On Amazon And Micron

Market Surges Breakouts All Over

What The Heck Happened

Microsoft Bulls May Be Too Bullish

Alibaba Stock May Surge By 11%

Why Broadcom May Rise As Much As 17%

Why Celgene’s Beaten Down Stock Can Rise 28%

Why Overvalued Gilead May Fall 10%

Why Micron’s Stock Bulls May Be Wrong

Why Bank Stocks Are Ready for a Short-Term Pullback