Stocks continue to rebound with the S&P 500 rising once again. All the talk is about the Fed cutting rates and the recession that is on the horizon. It is tiring. I feel like they have been saying the same thing for the past five years, but yet it never comes. There likely will be a recession again at some point down the road. But, how can you go into a recession when you never had any real growth in this latest “recovery” — I still don’t know how we can be in a recovery after a decade, but anyway. Look at the chart below; the GDP just reached 3% growth for the first time since 2005. How can you have a slow down if you never sped up, to begin with?

For the most part, the growth we have witnessed over the last 15 years would have been unacceptable levels in any other time. Look at the chart above, in the 1990’s we had just one blip of 2.5% growth. For most of the 1960 and 1980s, you could say the same thing. Except today’s slow growth environment has been accepted as the norm. So anyway, I’m feeling down now.

The latest GDPNow reading suggests the second quarter is growing at about 1.5%. But remember that the first quarter started slow and strengthen over time, So let’s give it time to see how it develops.

Meanwhile, non-farm productivity increased by 3.4% while unit labor cost plunged by 1.6%. Estimates had been for 3.4% and -0.08%, respectively. The chart below shows a pretty healthy increase productivity. 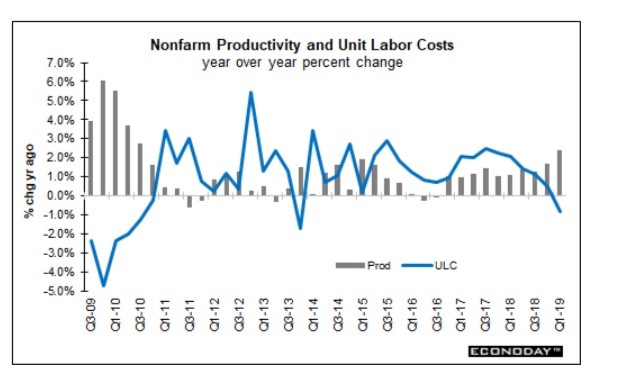 I know, I know, we aren’t allowed to talk about the Services PMI’s, because it is a forbidden statistic that would suggest all is well in the economy. You know, we do happen to live in a services-based economy. Yeah it’s true, really –about 80% or so. This month that reading rose to 56.9, better than April’s 55.5.

Meanwhile, the employment component of the index increased to 58.1, better than Aprils 53.7. Certainly not the recessionary type of numbers we have heard the mainstream talking about, sorry. 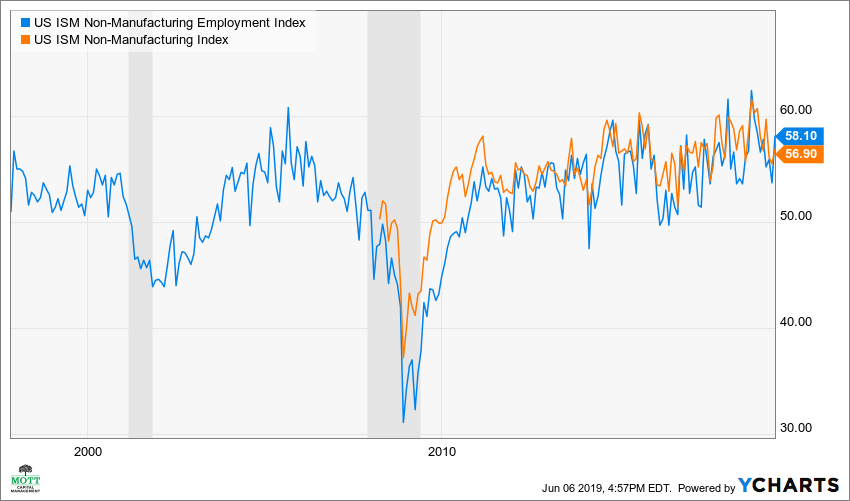 I’m not saying the Fed shouldn’t cut rates, they should. I believe they have over tightened. However, we live in a low inflation, low growth world. The slow growth and low inflation rates do not mean a recession is coming. Most indicators suggest that one isn’t even close.  However, we can only focus on the negative, like the slowing manufacturing sector.  But here is the biggest problem for the cries of recession, by the way, these are the same calls we heard in December followed by a 3%+ for 1Q GDP, the ISM manufacturing PMI is not suggesting a recession either. Historically that reading has to fall to around 48. (Premium Content: Why The Dollar May Be Signaling Three Fed Rate Cuts) 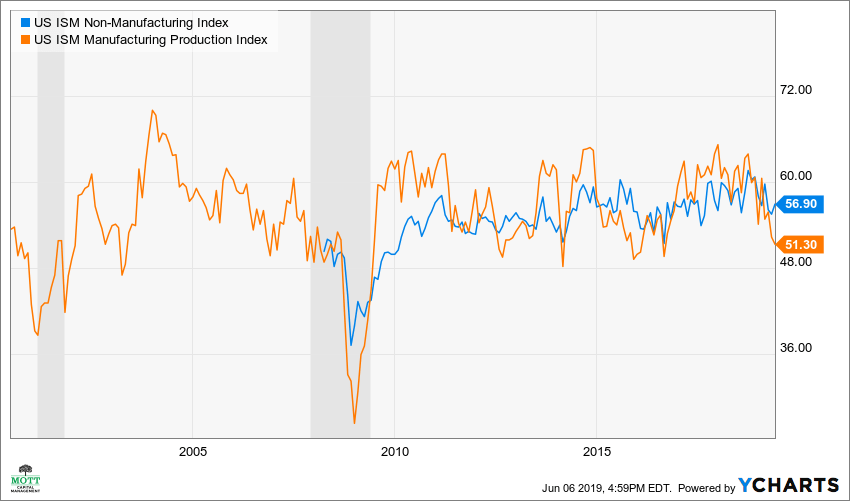 Anyway, enough with that.

The ECB is prepared to do whatever it takes and they are getting ready to potentially  cut deposit rates and reinstitute QE. But yet the euro strengthen today! Sorry, if you want to know why you will have to watch my Premium Content: Why The Dollar May Be Signaling Three Fed Rate Cuts. Hey, I have to eat too. Plus my kids are growing, and my eight-month-old golden retriever puppy now weighs 70lbs and is eating everything in sight, even my daughters’ sandals.

AMD exploded higher today, ripping right through resistance at $31.40 and it appears AMD is setting its sights on $32.30.

Tesla also rose above resistance today at $205 and held. I think this sets up a potential run for TSLA to $225.

After plunging on Monday, Visa recovered all of its losses and is now higher. Visa broke out today rising above resistance at $165.80. It likely sets up a move to $173.

Amazon, at a moment of truth facing a downtrend and resistance at 1,772. I had thought AMZN would rally back to its all-time highs. But now I’m beginning to believe it AMZN is heading lower towards $1620.

Nvidia is starting to shows signs of trending towards $150.